So, yes, the incredible Split This Rock Poetry Fest in Washington D.C. was at the end of March, before the PEN awards, but I was so busy getting ready for PEN (got my hair cut, took a shower, shined my boots, that sort of thing) that I didn’t have a chance to write this entry.

I am so glad I went. Because of the semester teaching/grading crunch, I flew down Friday morning and stayed through Saturday night, but I missed some incredible readings and panels with such a short window. Next time – I am definitely going next time – I’m going for the whole of it.

If you’re not familiar with Split This Rock and their mission of “poems of provocation and witness,” check out their website here:

…and, at the very least, sign up for their poetry emails. The poems of the week are ones that make me pause and listen and consider the space I inhabit: white, female, middle class, mother, in a heterosexual relationship, American, New Englander, educated. I listen and learn, carry these poems forward.

I went to some brilliant panels and was a small part of one of the readings, pictures below courtesy of the official Split This Rock photographer, Kristen Adair. I read first:

Dan Vera introduced us with his great stage presence and warmth and obvious passion for poetry. 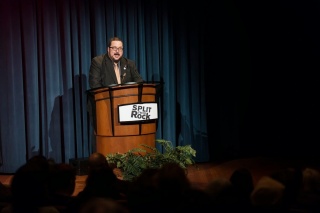 The features followed: first, Maria Melendez Kelson. I have her gorgeous book Flexible Bones (now signed, yay!). What a performer – big gestures, big presence, moving poems. She owned the stage. She’s also adorable and a sweetheart. You know how it is when you meet someone and have the sense they will be part of your life, somehow, at some point? I had that sense with Maria. May I be so lucky.

Tim Seibles next – I love his book Fast Animal (now also signed – love the festival signature gathering!). Tim was the judge for this year’s Split This Rock poetry contest, so he’s the reason I went. He read one long, incredible poem: “One Turn Around the Sun.” Later, I heard someone say “Now there’s an argument in favor of the long poem.” I honestly sat on the edge of my seat through the whole thing, loving the way the narrative looped back on itself, the ants and the lover and so much sexy goodness returning and returning and me, the happy listener along for the ride.

Anne Waldman was the closer. Later, my friends asked me what I thought of Anne, and I understand why they asked. She’s not linear, not overtly narrative – she’s a poet of susurrus and sweat and song, of discord and concordance, of disturbance, of thunder. I honestly have never seen anyone quite like her, and rather than try to trap her words under some story line, I very happily let her verse wash over me, a great wave of sound and rumbling and melody. At times, I had no idea what was going on, and I frankly did not care. If she had not stopped on her own, I tell you I would still be sitting in that seat in D.C., ridiculously hungry but wildly happy, not caring that my plane home had passed me by. Look at this energy: 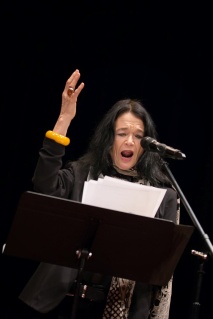 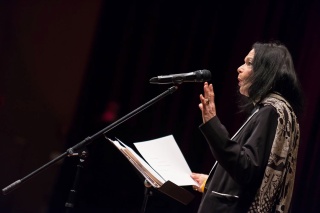 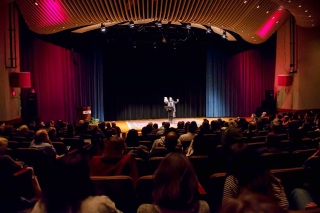 By the end, you had the feeling that she might jump off stage, gather the whole crowd on her shoulders, and take to the streets. Take over the streets. I think she eats sheet metal and bench presses pianos.

That was ONE reading. Crazy, no? I also had the joy of hearing Eduardo Corral, Natalie Diaz, Claudia Rankine, Myra Sklarew, Gayle Danley, and more at panels and readings, so I’ll put a few of their photos below. Their words broke me in the way only poetry can. 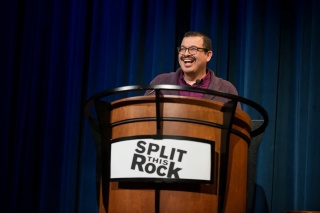 Who’s responsible for all this, you ask? Sarah Browning, below, at one of the Take Poetry to the Streets events. Small world: she’s the daughter of Preston Browning, activist and owner of Wellspring House, where I like to go for writing retreats. I’d met her only in passing a year before, so it was great chatting with her before the Kelson/Seibles/Waldman reading. 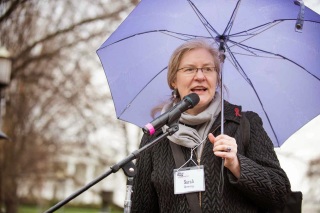 I met so many fabulous folks! Special thanks to Karren Alenier, who found the text for Tim Seibles’s poem and made me feel welcome in a city not my own.

Overheard at the conference: “This is what AWP used to feel like, before it got so big.” I never went to AWP when it was smaller (there were upwards of 15,000 attendees at this year’s AWP), but I can imagine it. All the big names at SLR were approachable, in attendance at the events, happy to talk. And yet – names didn’t seem to matter. No one’s giant ego knocked anyone down. There was space for being heard, for listening.

5 thoughts on “Split This Rock Poetry Fest (the nonlinear post)”